The Delmon Young Effect Is Crippling The Phils Lineup: Does it Need To Be Eradicated?

Charlie Manuel is, if not anything else, loyal to his players and his gut-feelings when it comes to filling out the Phillies lineup card every day. If it’s his dedication to Jimmy Rollins batting lead-off over the years or leaving Cliff Lee in for 120+ pitches when he might be cooked, he certainly honors a hunch for better or worse.

So it should come to no surprise there exists a strong belief in his mind that Delmon Young is the right-handed bat to protect Ryan Howard in the five-spot.

While maybe later this season that could eventually be true, the Delmon Young Effect has been plaguing the lineup over the past month after his return from an ankle injury.

Any batter entering into the MLB season a month late due to injury–and slightly out-of-shapedness–is going to play a little catch-up baseball at the plate and Young is certainly not an exception to the rule. 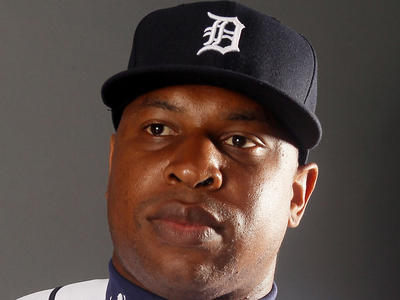 Delmon Young has a 1 YR deal worth 750 K – with a potential $2.5 MIL in incentives in Philly this season. Young hit 18 HRs and drove in 74 RBI for the Tigers last year – but only walked 20 times all year and carried an OBP of .296. He was worth the low risk though – and brings a playoff pedigree to the table. In the 2012 playoffs for Detroit, he hit 3 HRs, added 9 RBI and hit for an OPS of .907 with the AL Champion Tigers. Perhaps that is the player Manuel envisions.

But, the Phillies skipper continues to trot Young out there behind Howard with the hope that he’ll return to 2010 form where he batted .298 as a doubles machine (46) en route to 112 RBIs for the Minnesota Twins. However, it should be known that he did most of his damage batting sixth and seventh in the lineup that year.

Don’t get me wrong, I love me some Chollie, but at a key point in the season where neither the Nationals or Braves have pulled away from the rest of the division, the time is most definitely not now for loyalty to a hunch rather than to the rest of the team.

The insertion of Delmon Young into the five-spot (which is the only place in the lineup he’s batted this season) triggered a disruptive tremor which has been felt among probably the three most important batters in this Phillies lineup, Michael Young, Ryan Howard and Chase Utley.

Delmon Young / Game Log 2013
Provided by Baseball-Reference.com: View Original Table
Generated 5/19/2013.
Ryan Howard: Before Delmon Young returned from his rehab assignment on April 30th, Ryan Howard had improved his batting average from .241 on April 17th to .286 on April 28th only striking out eight times in that 10-game span. In the 17 games which followed, Howard’s average has dropped significantly from .286 to .245 with a whopping 23 K’s.

Michael Young: It’s no coincidence that with Michael Young batting fifth behind The Big Piece, the offense
was beginning to show signs of a rebirth in 2013. During the same 10-game span as Howard, Michael Young saw his steady-Eddie average rise to .352 on April 28th with an OBP of .418. Since his move to the 3-spot after Delmon Young’s return, he has fallen to .300/.395.

Chase Utley: Chase was raking in April and from the 17th through the 28th, he stayed on pace to hit around the .300 mark arriving in Cleveland with a .296 average, a .340 OBP and five home runs while batting third in the  lineup. Since then, he’s been batting 2nd and is now carrying a .268 average with just 2 home runs and a .325 OBP.

It seems clear to me that it’s time for Charlie to demote Delmon to either the sixth or seventh spot in the lineup in order to find his stroke after missing the first month of the 2013 season.

This is not to say that I don’t think Delmon Young can become a better contributor to this Phillies offense, I just think that the fifth spot in this lineup is far too important with the Braves and Nationals still within a reasonable striking distance.

Yes, maybe, but if they are to consider themselves legitimate playoff contenders rather than salary sellers at the trading deadline, the time is now to make a change in order for this lineup to click. Because I don’t think any of us want to start reading about Chase Utley trade rumors in June or July.

Ryan Howard has seen his production plummet since the hefty Delmon Young has inserted into the lineup Apr.30/2013. Young is not a very patient hitter – that features a Lifetime OBP of .316. Howard, and the rest of the lineup are just not seeing any quality pitches to hit with the man making it easy to punch out by the opposition.  The offense has been cascading down the ranks of Team Batting Average.  Could it be as simple as DY having infiltrated a negative effect?  The Phils have plenty of options to rectify the situation.  At 20 – 23, the franchise is extremely fortunate to remain in striking distance of the NL East lead heading into today’s game with the Reds. The management simply can’t wait much longer on Delmon (unbelievably only 27 years old) to break out of his funk.

A big thank – you goes out to our Philadelphia Phillies Correspondent Chris Creighton for preparing today’s featured post.  Chris is a Phillies Phan, Baseball fan & player. He thinks that there is no better place for food and is a  proponent of the city of Philadelphia. Huge U2 fan. Phillies writer at  http://www.warroomphilly.com .

Please e-mail me at: mlbreports@gmail.com with any questions and feedback. To subscribe to our website and have the Daily Reports sent directly to your inbox, click here and follow the link at the top of our homepage.