← Mat Latos to the Reds: Former Padres Ace Proving to be a Key Acquisition
Us Cellular Field: Book Excerpt from ‘The Fastest 30 Ball Games.’ →

Jerry Dipoto is Exactly What the Angels Needed: The Baseball Journey From Pitcher to GM 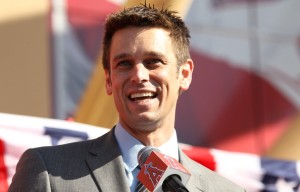 Sam Evans: Angels General Manager Jerry Dipoto has come a long ways since a neck injury ended his playing career as a pitcher ten years ago. Working his way up as a scout, Dipoto has ascended to one of the highest ranks in baseball, the G.M. In his ongoing tenure with the Angels, we have learned that Dipoto is committed to bringing a World Series to Anaheim. His bold moves have captured the attention of the baseball world. With any luck, Dipoto could have his second World Series ring this October.

Jerry Dipoto was born in 1968 in Jersey City, NJ. He is more than five years younger than Jamie Moyer. Dipoto attended Virginia Commonwealth University and was selected by the Cleveland Indians in the third round of the 1989 MLB Amateur draft. It only took Dipoto four seasons to reach Cleveland, thanks to great numbers everywhere he pitched. In 1992, with Dipoto pitching for Colorado Springs of the PCL, the Indians decided to switch him to the bullpen.

At the age of twenty-five, Dipoto finally reached the majors with Cleveland. His first season, 1993, turned out to be one of his most successful seasons in the majors. In forty-six games, Dipoto recorded eleven saves, posted a 2.40 ERA, and didn’t give up one home run all year. In November of 1994, Dipoto was traded along with Jesus Azuaje, Paul Byrd, and David Mlicki to the Mets for Jeromy Burnitz and Joe Roa. In 1995 and 1996, Dipoto’s only two seasons with the Mets, he proved himself as a solid middle reliever who could throw almost eighty quality innings per year.

After the ’96 season, Dipoto was traded to Colorado for Armando Reynoso. From 1997 to 2000, Dipoto was worth 4.7 WAR for Colorado, thanks to his impressive ability to keep the ball in the ballpark. In Spring Training of 2001, Dipoto broke two vertebrae in his neck, which caused him to retire. Over the course of his career, Dipoto also missed time for a bulging disc in his neck, thyroid cancer, and a potentially deadly bloody clot.

When Dipoto was healthy during his career, he was very comparable to Jason Frasor of the Blue Jays. Aside from their eerily similar statistics and repertoire, Frasor wears #54 for Toronto, and Dipoto wore #45 throughout his career. Dipoto was never an All-Star, and frankly, he wasn’t even close. However, a reliever that can throw a lot of innings, keep the ball in the ballpark, and not walk very many people, is a valuable asset to any franchise.

In 2003, just two years after his playing career had ended; Dipoto accepted a job as a scout for the Boston Red Sox. He stayed there through the 2004 season, which of course was the year when Boston broke the curse and finally won the World Series. In 2005, Dipoto accepted a job as the director of player personnel in Colorado, and then in 2006, he took the same job in Arizona under his longtime friend Josh Byrnes. In July of 2010, Byrnes was fired from his position as GM of the Diamondbacks, and Dipoto was named the interim GM. Arizona chose to hire Kevin Towers as their next general manager, so Dipoto gladly accepted the Angels General Manager position in October of last year.

As everyone knows, Dipoto didn’t waste any time once he became the Angels GM. Quickly, he signed Albert Pujols and C.J. Wilson, two of the top free agents on the market. Whether it was the right thing to do or not, Dipoto’s career as a GM is likely going to be defined by the huge contract he gave Albert Pujols. It may have come on the owner’s instructions, but the signing was on Dipoto’s watch. As long as the Angels end up winning a World Series with Pujols, the signing will be seen as a success.

If Dipoto can figure out a way to make the Angels the better baseball team between Anaheim and Texas in these coming years, he will deserve a ton of credit for turning that franchise around. The 2011 Angels were old, and underperforming. The 2012 Angels have also underperformed a little, but they have still been one of the best teams in baseball throughout the course of the season. Sure, Dipoto wasn’t responsible for bringing in Mike Trout, but without Dipoto’s moves, the Angels probably wouldn’t be in contention this year. 2012 will continue to be a fun, nerve-racking year for Angels’ fans as they try to get a playoff spot with Texas having built a wide lead, and Oakland breathing down their back.

In Los Angeles, Angels’ fans have to be pretty pleased with what they’ve seen from Dipoto. He’s shown a commitment to winning, and hasn’t been afraid to make big moves. When the Angels weren’t hitting to start the season, Dipoto fired longtime Angels’ hitting coach Mickey Hatcher. When a fan wrote to Dipoto suggesting a trade, he sent a hand-written response back. When the Angels needed pitching help at the trade deadline, Dipoto made a blockbuster deal for Zack Greinke. If Dipoto has proven anything over these last six months, it’s that he’ll do whatever it takes to put a winning team on the field.

***Today’s feature was prepared by Sam Evans, Baseball Writer.  We highly encourage you to leave your comments and feedback at the bottom of the page and share in the discussion with our readers.  You can also follow Sam on Twitter. (@RJA206)***

← Mat Latos to the Reds: Former Padres Ace Proving to be a Key Acquisition
Us Cellular Field: Book Excerpt from ‘The Fastest 30 Ball Games.’ →
%d bloggers like this: