Ichiro Suzuki Maybe Older, But He Is a Perfect 4th OF/PH 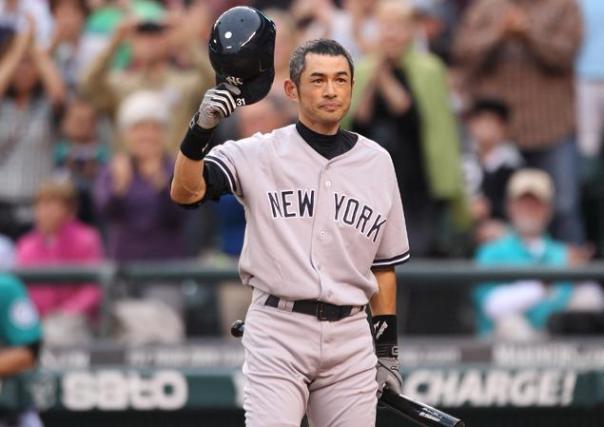 Okay so Ichiro Suzuki doesn’t possess as much speed as he once did, or even hit .320 like he routinely did for the Mariners.  Plus yes, there is virtually no power…however he hit .284 last season, and for a 4th OF or Pinch Hitter in the Senior Circuit, that would be much likened.

I was sitting there last month debating on whether the Mariners should give him a call for a return to Seattle, considering they tried signing   Franklin Gutierrez (hurt all of 2014, which was the biggest waste of a $MIL ever by M’s mgmt – considering the guy already burned the squad for 120 games missed in 2013) and employed friggin Endy Chavez for much of the 2014 year.

I am giving Jack Z. and the Mariners some chops for picking up Justin Ruggiano and Seth Smith instead in the last 30 days, but the point was, Ichiro may not have wanted to return to the PAC NW anyway even though he could have helped that club as they were constructed then.

Have you seen some of the 4th OF and PH that still have jobs in the Majors?  Heck yeah… give me a guy who can put the bat on the ball still.

Suzuki is a great contact hitter even at his age, and he will likely see some AB roaming the outfield for the Marlins this year.  I love Giancarlo Stanton, but it is not like he ever plays 162 games straight on the diamond.

You can best guarantee that Pete Rose will have a thing or 2 to say about Ichiro Suzuki if he eclipses the Professional Hits Record. The banished ALL – Time Hit King has already stated if Suzuki’s JPBL numbers are allowed, than so should his MiLB hit totals. Rose and Suzuki both share the MLB record with 10 – 200+ Hit Seasons.

With 2844 Career Hits under his belt in North America, and another 1278 base knocks credited in the Japan League, the 10 time ALL-Star is not only chasing the 3000 hit club, but he is chasing down Pete Rose for the ALL-Time Professional Hits Record.  I guarantee you that means the world to him at this point.

At a total of 4122 combined hits, he will likely pass  Ty Cobb for 2nd ALL-Tome this year once he cracks base hit number 4192 (just 70 hits away).  I doubt he will get the 135 hits required to pass #14 in this campaign, but I don’t think Suzuki is finished after this year either.

While not a great defender anymore, Suzuki is adequate enough in LF or RF not to embarrass himself.  In fact, if you are watching him stretch for the whole game, he may just tire you out.

The Marlins could even play the former Mariner and Yankee more if the Miami squad falls out of contention.  They should have had a Team Option for him in 2016, as the notoriety and publicity the team could get would really help a team if a chase for 3000 escalates.

Players like Ivan Rodriguez and Omar Vizquel almost had the number within their grasp before hanging up the cleats for good.

Whether Suzuki ever reaches the milestone, no doubt he is a future Baseball Hall Of Famer.  His career average should not dip too much below .315 by the time he is done, and he had 10 straight 200 hit campaigns to start his brilliant career.  Throw in 2 Batting Titles, an MVP and Rookie Of the Year in the same season of 2001, coupled with 10 Gold Gloves and 4 Silver Sliugger Awards – and you are talking a gifted player.

Did I mention he also led the league in 7 hits during 7 different campaigns, and broke George Sisler‘s single season hits mark of (257), with bashing out 262 hits

Suzuki is the Active Leader in Stolen Bases at 487. and he may finish north of 500 in that category as well.  Ever the leadoff man, Suzuki had 8 – 100+ Runs scoring seasons.  He also played the majority of his career at a unfriendly ballpark to hitters in Safeco Field.

There should be some more magic in that bat he waves around like a tennis racket.  Let’s hope he can reach the 156 hit mark, making him part of that elite club, but also becoming the professional hits leaders

Ichiro Suzuki fashioned 10 straight 200 hit campaigns to start his career, tying Pete Rose for the most 200 Hit season ALL-Time, and setting the most consecutive years with the feat. He may only be a .270 – .280 hitter now as a 4th OF, but he still plays decent defense, and makes nice contact. Suzuki is about a full year of AB away from setting the professional hits record. He may have a few years left to rach the 3000 hit club and also become the ALL-Time Professional Hits Leader. He starts 2015 just 134 hits behind Pete Rose for 1st, and 69 hits behind Ty Cobb for 2nd. These 3 men are the only ones to have surpassed the 4000 hit plateau in pro baseball.

Please e-mail me  at: mlbreports@gmail.com with any questions and feedback.   To subscribe to our website and have the Daily Reports sent directly to your inbox, click here and follow the link at the top of our homepag