A Preview Of The 2014 San Francisco Giants Starting Pitching Staff

Matt Cain is struggling this season to say the least. He has games where he can be most dominant pitcher in baseball, then other games where he struggles to make it through five innings. He has a 4.35 ERA in 153 innings pitched while giving up 19 HRs.  This mediocre season is cause for concern, since he now makes at least $20 MIL per year from 2013 – 2017, with a $7.5 Buyout in 2018, or one more year at $21 MIL.  Perhaps winning 2 of the last 3 World Series, and logging over 600 + IP combined in that time frame is beginning to take its toll.  I would bet on Cain to have a big bounce back campaign in 2014.

At this point in the season, it is pretty safe to say that the San Francisco Giants will not be playing beyond September.

This year has been a big disappointment for the defending World Champs, collapsing big time before the All Star Break.

Coming into 2013, the Giants had basically the same team that won the 2012 World Series. The performance though, compared to 2012, was night and day.

The biggest difference in the team’s performance from 2012 is undoubtedly the pitching.

Matt Cain was the undisputed ace of the staff in 2012, throwing a perfect game and posting a 2.79 ERA.

Ryan Vogelsong and Madison Bumgarner both had a 3.37 ERA. Even Barry Zito had a tolerable season, going 15-8 with a 4.15 ERA – including a huge unbeaten streak – that carried through the 2013 Post Season..

This year, a 4.15 ERA would be acceptable for any pitcher in the rotation not named Bumgarner. Madison Bumgarner has been the one bright spot for the staff this year, carrying a 2.73 ERA.

Tim Lincecum is not having the best season pitching for the Giants. However he did throw a no-hitter a couple of weeks ago against the San Diego Padres. The next start that followed he got hit hard. He has a 4.38 ERA in 148 innings pitched while giving up 16 HRs and striking out 153 batters. The strike out number looks good, and his WHIP of 1.277 is only slightly higher than he his career clip of 1.236.. The opposition has a .241 batting average against him this season, with right-handers hitting .248. The opposing teams love to hit with runners in scoring position facing him, as they a .287 average in this situation.  Resigning Lincecum should take significantly less than the $20 MIL he will rake in for this season.

This is obviously not the same team that won the World Series last year. So, after looking at the performance of his team this season (should it not improve), what should General Manager Brain Sabean do with his starting staff for 2014?

To start, the contracts of Tim Lincecum, Barry Zito, and Ryan Vogelsong might all end after 2013 – if the club decides not to give the latter two a couple of Team Options. 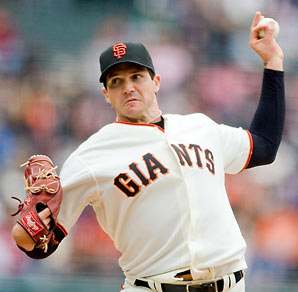 In my opinion, the only guy worth resigning is Lincecum. Although his ERA has been much higher than it was during his Cy Young years, he continues to show that he can dominate.

He has his rough games in which he gives up five, six, even seven runs, but he also has games where he gives up less than four hits and strikes out over ten. He threw the first no hitter of his career this year as well.

My theory on Lincecum’s struggles is his failure to adjust. All pitchers go through an adjustment period in their career.

Roy Halladay, most notably, went through such period and became an even more dominant pitcher than he was before his adjustment period.

Tim Lincecum still pitches like he did when he threw upwards of 96 MPH. He also lacks consistency on a game-to-game basis.

It is very frustrating for Giants fans to see their former ace go out one night, strike out 12 and win, and the next outing get shelled for six runs over three-plus innings.

Lincecum’s performance over the past few years might save the Giants some money when trying to resign him.

This could also be a good opportunity for other teams to pursue the former Cy Young winner.

But, when everything is all said and done, I would like to see what Lincecum could do if the Giants gave him another shot—something along the lines of a two-year $18-20 million contract (about half of what the team gave him two years ago).

Should the Giants resign him, they still have two rotation slots to fill. Matt Cain and Madison Bumgarner will sit atop the rotation with Lincecum following.

As of now, the Giants do not have a viable prospect to fill either empty rotation spot. Zack Wheeler would have been a perfect candidate should the team have not traded him to the Mets.

The lack of prospects will probably cause the Giants to sign a free agent.

I could see a guy like Matt Garza or Josh Johnson being a candidate to fill in the rotation. Johnson is coming off a very disappointing season, and pitching in the pitcher-friendly confines of AT&T Park might do some good for the former Marlins ace.

If the Giants could get him for a low price and he managed to stay healthy and pitch well, signing Josh Johnson would be a steal.

Matt Garza—although probably a lot more expensive than Johnson—would be a very smart signing for the Giants. Loading up on pitching is not a bad idea when trying to return to contention—especially when playing in San Francisco. 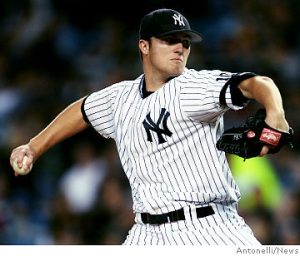 Hughes was signed to a 1 YR/7.15 Million Dollar Contract. If he had duplicated his 2012 year, he could have command edbig dollars in 2014 Free Agency. Instead, he has floundered. However, you must look at his career splits, Hughes, 27, has a 4.07 ERA in 84 Career Games Starts, opposed to a 4.87 ERA at both Yankee Stadiums.

Another viable option maybe Yankee Phil Hughes.  Often a victim of Yankee Stadium starts, this HR prone Starting Pitcher could see a revitalized career path by a move to the NL West.

He should be a bargain considering his brutal 2013 season thus far.  Hughes has good stuff, and maybe a few mistakes that he did make, could be eaten up by the spacious AT N T Park.

Overall, the Giants have a lot of work to do in the offseason. Moves need to be made if the team is not going to repeat its 2013 performance.

The club will have some payroll flexibility with Zito, Lincecum and Vogelsong, making over $43 MIL.  Even if the club has to buyout Zito and Vogelsong, that would only equate about $8 MIL.

This clears the deck to have $35 MIL more to spend.  With that cash, the franchise could definitely replenish the talent on their Starting Core.

Matt Garza was the big fish in this year’s trade deadline. There were plenty of teams that him had him on their radar, and they scouted every game he pitched for the Cubs this season. He won six games for them this season with a 3.17 ERA in 71 innings pitched to go along with 62 strike outs and 20 walks. He had a WHIP of 1.14 and had only given up eight home runs on the season. Garza was holding the opposition to a .229 batting average, while righties only hit .224 when facing him. He is good when runners are in scoring position, as indicated by teams just managing a .245 average.  As a Veteran Pitcher, Garza would benefit from a move to the NL at this stage.

***The views and opinions expressed in this report are those of the author and do not necessarily reflect the views of mlbreports.com or their partners***

Today’s feature was prepared by our Baseball Writer Bernie Olshansky. We highly encourage you to leave your comments and feedback at the bottom of the page and share in the discussion with our readers.

Please e-mail us at: mlbeports@gmail.com with any questions and feedback. To subscribe to our website and have the daily Reports sent directly to your inbox , click here and follow the link at the top of our homepage.