Tito Back To Fenway: Red Sox Fans Embraced Him, The Team Lost The Opener – Then Streaked To The AL East Lead

On top of leading the Red Sox to 2 World Series Titles, Tito also led the club to a lot of other successful seasons. He got the team to at least 86 Wins in each of his 8 seasons in Boston and helped them win 90+ games in 6 of those years.  The Red Sox also ended a curse for the World Series that lasted 86 years to finally end.  Now with Cleveland, he will help the franchise try to win a World Series for the 1st time since 1948.

First of all, sorry for the delay with this article. It’s been a little over a week since my last article, and already another series has passed since the end of the one I want to talk about. Nevertheless, Terry Francona aka Tito made his return to Fenway as an opposing manager for the Cleveland Indians.

I was actually lucky enough to be in attendance for his first game back on Thursday May 23, and the atmosphere was awesome as it usually is at Fenway. Terry Francona received a standing ovation, deservedly so, and his Indians beat down the Red Sox 12-3.

This series was more than just Francona’s return though. It was somewhat of a litmus test for the Red Sox.  The Indians have shown they are a formidable team this year sitting only a half game out of first place in the AL Central (29-24 Record) and having one of the most potent offenses in the game at the moment.

Heading into play Sunday, Cleveland’s vaunted offense still ranks  4th  for HRs (69), 4th in Runs Scored (271) and 5th in OPS (.769). The Red Sox however, showed they were the better team by winning 3 of 4 in the series. Boston’s offense reigned supreme against the Indians as do their season statistics. Boston surpassed Cleveland based on their final 3 games of their series last weekend. 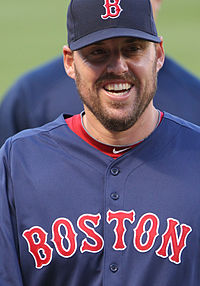 Lackey has definitely earned a photo in this article as he has looked better than ever since joining the Red Sox in 2010. He’s only 3-5, but he’s showing that he can work deep into games, control the baseball, miss bats, and keep opponents runs to a minimum.

In the 1st Game, Ryan Dempster ran up his pitch count early and let up 4 ER in just 3 IP. Clayton Mortensen and Alex Wilson didn’t fare much better as they combined for the next 3 IP allowing the rest of the 7 ER. All of Cleveland’s starters had a hit in the game.

The offense couldn’t muster much, just a 3-Run blast from David Ortiz. It seems like just a minor blip in the radar for the Sox, but Dempster hasn’t looked as strong lately as he did to begin the year. Mortensen, while a valuable member of the pen who has multiple inning capabilities, has also looked shaky as of late.

In the 2nd game John Lackey took the bump and pitched a gem. He threw 7 Innings allowing 2 Hits and 1 Unearned Run while Striking Out 8. He has been coming on strong since his early season injury has healed and is looking like a mid-rotation starter.

He has a 2.96 ERA which is ahead of Jon Lester who is having a really good season in his own right. Lackey has thrown 5 Quality Starts in his 8 total Starts this year.

The 3rd game was a come from behind victory as the Red Sox rallied down 4-3 in the 8th, to score 4 Runs in the Inning for the 7-4 victory. No one was overly spectacular but Lester went 7 Innings strong, and Jose Iglesias and Pedro Ciriaco both had 3-4 games at the plate from the bottom of the order.

Game 4 was easily the most exciting game of the series as the Red Sox won in walk off fashion. Jacoby Ellsbury did the honors with a double in the left/center field gap with the bases loaded to drive in the winning runs.

Like I said, this was a good test for the Red Sox. They faced a pretty good team and held their high-powered offense at bay most of the series as they won 3 of 4.

It appears as though Lackey is finally the guy they were looking for when they signed him and that could be key for the team in October (hopefully) as they really need either Lackey or Dempster (in addition to Lester and Buchholz) to be able to rely upon for quality starts.

Lackey was the guy the Angels gave the ball in big games for a time, so he has the experience. It would be great to see him stay healthy and be that 3rd option for the Red Sox.

One concern that has caught my attention recently is the health of Shane Victorino. The injuries so far this season seem to be minor, but he is an important part of the team. I will say I do like Daniel Nava getting a lot of playing time though.

With that great series, and seeing the Yankees struggle a little lately (3-7 in their last 10 Games) the Red Sox have built themselves a 2 Game lead in the division, but 3 teams are within 3 games, and the Blue Jays shouldn’t be counted out just yet with all the talent they have on their roster.

If you told me this is where the Red Sox would be 2 months into the 2013 campaign back in Spring Training I would have been ecstatic. It might be a little early to say this, but I think they are definitely contenders and NOT pretenders.

Back to Terry Francona. What a job he has done with his Cleveland Indians ball club. Not to say it is all his doing, or that it isn’t, but who would have thought they would be doing so well? Not I, that is for sure. Again, the season is young still, but he is looking like one of the best Managers in the game right now with what he has started to do in Cleveland, and what he did for years in Boston.

I remember when Tito was hired, after the brutal end to Grady Little’s time as the Red Sox Manager, in 2004. And then I remember when later that year he led the team to their 1st World Series Championship since 1918. Then he won another in 2007.

It may have just been time for the Red Sox and Francona to part ways after the 2011 season, as even the best of relationships in pro sports run their course, but all that has transpired has made me think about how I took Francona for granted in his time with the Sox.

I was a big Francona fan no doubt, but it was definitely a case of “you don’t know what you have until it’s gone.” He may have been better than I, or many fans, gave him credit for. Who would have thought that after 2011 Francona and the Boston Red Sox (separately) would be back to the top so quickly? 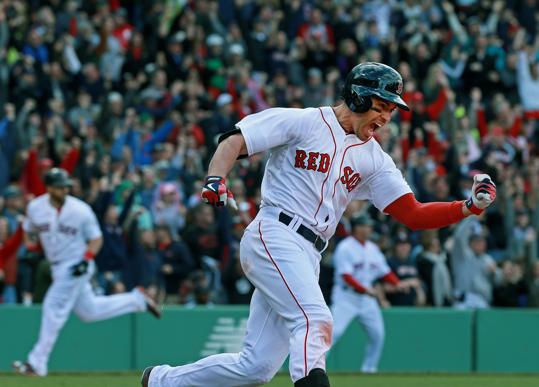 A picture from Ellsbury’s walk off hit in the final game of the recent series vs. the Indians. Ellsbury seems like he might be turning the corner for the year. He just set a Red Sox single game record with 5 SBs in a game.  He is banged up and hurt now.  Ellsbury is a Free Agent and the end of the year – and can ill afford to miss any significant time.

A big thank-you goes out to our baseball writer Ryan Dana for preparing today’s featured article.  Ryan is junior studying physical education with a concentration in coaching at Bridgewater State University. He has been playing baseball since he was 7 and coaching since he was 14. Ryan wants to be a college baseball coach once he graduates.

Ryan is, and always will be, a diehard Boston Red Sox fan. Secondary to baseball, he is a big health and fitness enthusiast. You can find Ryan on Twitter . Follow @ryandana1 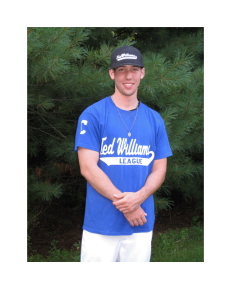 Please e-mail us at: mlbeports@gmail.com with any questions and feedback.   To subscribe to our website and have the daily Reports sent directly to your inbox, click here and follow the link at the top of our homepage.