The Cubs final payroll from 2012 was just north of $107 Million, and, over the winter, President of Baseball Operations Theo Esptein and GM Jed Hoyer added plenty of pitching depth to the 2013 team.

Only the Houston Astros stood between the Chicago Cubs and last place in the NL Central in 2012. The Cubs lost 101 games – their most losses since 1966, when the team went 51-103 — and finished with the second worst record in baseball. Under President of Baseball Operations Theo Epstein, the Cubs went backwards from the year before, losing 10 more games than in 2011.

The Cubs made Edwin Jackson their big winter signing, inking the Right – Hander to a 4 YR/52 Million Dollar Contract. He went 10-11 – with a 4.03 ERA last season, and since 2009, has played for the Tigers, Diamondbacks, White Sox, Cardinals and Nationals.

Alfonso Soriano OF – $19,000,000 (7th year of 8 YR/136 Million Dollar Contract) – Soriano has two years remaining on the contract that effectively ran GM Jim Hendry out of town. The Left Fielder led the team with 32 HRs and 108 RBI in 2012, and the feeling is he won’t finish out his deal while wearing a Cubs uniform.

The Cubs signed Starlin Castro to a team-friendly seven-year extension that could keep the Short Stop on the North Side through 2020.

Edwin Jackson SP – $13,000,000 (1st year of 4 YR /52 Million Dollar Contract) – After being outbid by the Tigers for Anibal Sanchez, the team turned to Jackson and gave the Right-Hander exactly what he was looking for – a Multi-Year contract. He’s averaged 203 Innings per season over the last four years – while pitching for five different teams.  The traveling hurler will make $13 MIL for every year between 2013 – 2016.

Carlos Marmol RP – $9,800,000 (3rd year of 3 YR/20 Million Dollar Contract) – Marmol, like Soriano, might not survive the season in Chicago. He’s overpaid, he’s a trade candidate, and he’s set to hit Free Agency in 2014. He also has a strong Closer candidate Kyuji Fujikawa) breathing down his neck.

Matt Garza SP – $10,250,000 (1 YR) – The Cubs and Garza avoided Arbitration and reached an agreement a one-year deal. He’s already suffered a setback in Spring Training (strained lat) after being shut down in 2012 – with a stress reaction in his right elbow. He’s both an extension candidate and a trade candidate, but he needs to show that he can stay on the field first.  Garza will be a Free Agent in 2014. 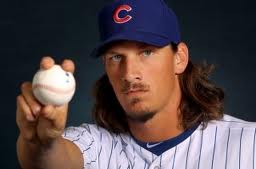 Jeff Samardzija could be the next Cub in line for a big pay day. With Garza sidelined, he’s likely to be the Cubs Opening Day Starter.

Ian Stewart 3B – $2,500,000 (1 YR) – Stewart missed most of last season after undergoing wrist surgery, and he’s already in danger of not making the team after straining his quad in Spring Training. The Cubs reportedly have a $500,000 termination fee included in Stewart’s contract.  The guy is Arbitration Eligible in 2014 and a Free Agent in 2015. 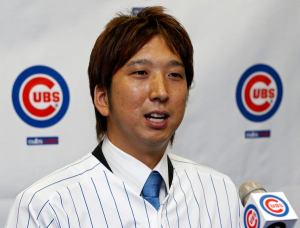 The Cubs signed Japanese Reliever Kyuji Fujikawa to a 2 YR/9.5 Million Dollar Contract. He’s pitched in the 2006 and 2009 World Baseball Classic, as well as the 2008 Beijing Olympics.

Junior Lake SS – $480,000 – Lake has a very small chance to make the team out of Spring Training as a Third Baseman after the injury to Stewart.   No service time in the Majors yet.  Arbitration and Free Agency clock not started.

Brooks Raley RP – $480,000 – Raley, a Left-Handed Relief Pitcher, made five appearances for the Cubs last season but struggled in his big-league debut with a 8.14 ERA. No service time in the Majors yet.  Arbitration and Free Agency clock not started.

Arodys Vizcaino RP – $480,000 – Vizcaino came over from Atlanta in the deal that sent Paul Maholm to the Braves. He’s coming off Tommy John surgery and is considered one of the Cubs top prospects.  The guy is Arbitration Eligible in 2015 and a Free Agent in 2018.

While the Cubs would have liked to come under their $107,708,021 from 2012 (final payroll number from CBS Sports here), it looks like the team will be right around that number again in 2013. The Cubs have quite a few extension candidates, including Garza and Samardzija, but Garza’s injury will likely prevent it from happening any time soon, and Samardzija has already opposed an extension offer (link here).   So the payroll might flux between $100 – $110 MIL.  If Soriano is dealt it will be closer to the lower end.

The Cubs could look to lock up young talent like Rizzo in the next year or two, and Barney’s stellar play at Second Base has certainly drummed up more interest his way from  inside the organization. It’s no secret that the Cubs would like to shed some of Soriano’s salary, but they may be forced to pay the majority of it to facilitate a trade. Marmol comes off the books next year, so that’s an additional 9.8 Million that the team will be free of. The only other Multi-Year deal coming off the books in 2012 is DeJesus, who makes $4.25 Million this year.

Soriano has two years remaining on the 8 YR/136 MIllion Dollar Contract he signed in 2007. The Cubs could look to trade their Left Fielder sometime in 2013, perhaps soon.

*** The views and opinions expressed in this report are those of the author and do not necessarily reflect the views of www.mlbreports.com and their partners.***

A big thank-you goes out to our ‘Cubs Correspondent’ Alex Kantecki for preparing today’s featured article.   Alex is a Cubs fan to a fault.  Sadly, his most memorable Cubs’ moment was watching the Cubs infamous 2003 postseason collapse while on a cruise somewhere in the middle of the Gulf of Mexico. But because he’s a loyal fan, he didn’t jump ship. Alex has a degree in journalism (yay!) and currently writes for Fake Teams, SB Nation’s fantasy sports blog, and BigLeaguesMag.com. Follow Alex on Twitter Follow @akantecki 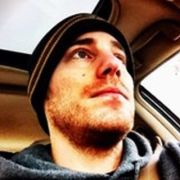