The Mariners Payroll in 2013 will be 80+ million dollars. Sadly enough, the Mariners are still not expected to compete in the American League West.

It has been over ten years since the Seattle Mariners found themselves as participants in the American League playoffs. Over the course of that time, the M’s have had their ups and downs (quite obviously more downs), and they have come close to getting back to the post-season on several occasions. However, the last three years have been frustrating for Mariners’ fans as the team has ended each season in last place in the AL West. Along with the post-season drought, the Mariners have made some poor contractual decisions. This seasons payroll will not be exceptionally high, but Seattle is far from a small market team. One of the benefits of this season is that the Mariners are not flooded with a lot of long term, massive contracts. The future for the Mariners can be bright, but they need to find some talented offensive pieces and a couple of arms to back their superstar ace, Felix Hernandez.

Without further ado, let’s take a look at the big deals that make up the top end of the Mariners payroll in 2013. I think most Mariners fans will ultimately be pretty disappointed in which player is following up King Felix on the payroll for the upcoming season.

The Mariners are paying one player superstar level dollars, and luckily enough for the Mariners, there is no doubt that the man nicknamed the “King” is exactly that. We could (and probably eventually will) spend days discussing how good Felix Hernandez has been over the course of the past four seasons. He is a dominant, durable workhorse on level with the absolutely elite pitchers of his era. Four straight seasons of over 200 Innings Pitched, 200 strike outs and over 22% strike out rate (8.65 K/9).

To explain how spectacular a player Hernandez is, I’m going to take a step back from those ridiculous numbers and give a very real life example. I’m an East Coast guy, who purchases the MLB Package every season. I love watching as much baseball as I can, but it is tough to battle through the West Coast games after working a full day. I stay up for the King. It is a privilege to watch him pitch, and Mariners fans should be ecstatic that he is their big money guy. We can only hope that the recent news related to his elbow was overblown due to his big money extension (the 7 year/175 million outlined above).

King Felix is the Mariners most expensive and important piece going 2013.

After King Felix, the Mariners payroll is far less impressive. Much like the Marlins payroll piece from last week, the Mariners second highest paid asset is no longer a member of the team. The Mariners have decided to give Chone Figgins 8.5 million dollars to not play for them. Short of actually lighting Safeco on fire, Figgins could not have been a bigger disaster after signing with the Mariners. In his last season with the Angels, Figgins was worth 6.9 Wins Above Replacement and was an elite option for the Angels. In all three seasons with the M’s, Figgins never approached those type of numbers again. His defense deteriorated, and in his last two seasons, Figgins was a below replacement level asset costing the Mariners a significant premium for his talents.

We have previously discussed Kendrys Morales and Mike Morse in the trade articles on each player. If you are interested in a more detailed review on those guys, please check on my pieces here here and here. Without rewriting those articles, the story on both Morse and Morales is very similar. Both players make sense for an offensive needy team like the Mariners, but both players come with warning signs that they may not be able to produce the power numbers that we expect from them. The best news for the Mariners is that neither guy is on a long term deal and both guys are worth a one year trial run.

The most interesting player on the list is Dustin Ackley. The 25 year old Second Baseman was a highly touted prospect in the Mariners system. After a fairly exciting rookie season, Ackley took a big step backwards during his sophomore campaign. Some of his struggles can be attributed to a BABIP which was almost 30 points below the league average.  Hopefully, a regression in that category will see Ackley’s offense bounce back to his rookie year deal.  However, most of his peripherals are fairly negative from his 2012 season.  At this point, its more a general hope that more Plate Appearances will allow something for click for Ackley than it is a statistical probability that he will meet his prior expectations.

As we move down the Mariners payroll, it becomes clear that the future of this organization exists in the players making the lesser percentage of the payroll (with the exception of King Felix of course).  The Mariners have a very interesting and promising group of players at the lower end of the salary spectrum.

As with previous lists, this list does not include players whose salaries are not clear or are signed to minor league deals with the potential to make the Mariners coming out spring training.  With little to no effort at all, most can see that future of the Mariners lies almost entirely in this list of players.  The analysis will start with the player who probably should be in the first list but the majority of his salary is classified as a bonus so I moved him to the second tier.  Danny Hultzen is probably going to begin the season at Triple-A where he can improve upon last year’s struggles at that level.

As discussed in the piece on the Vargas trade, Hultzen is an advanced prospect who was drafted second overall by the Mariners in the 2011 Draft.  Hultzen has shown the ability to strike out batters at every level including a very substantial 10.54 K/9 at Triple-A, which translated into a 23.8% Strike Out Rate. Hultzen’s big problem is very simple. He walked far too many batters at the Triple-A level to be trusted in the Major Leagues just yet. His 17.9% Walk Rate at Triple-A is beyond awful. As I have written before based on his pedigree, I believe Hultzen will turn it around and most likely be up in the Mariners rotation by the middle of the season. For now, he is a Minor Leaguer on a Major League deal trying to find his way to the big club.

This list also includes some young bats that the M’s will be relying on for the next several seasons. Jesus Montero was the jewel the Mariners obtained in last winter’s trade with that sent Michael Pineda to the Yankees. Montero struggled during his first complete season in the Major Leagues. Montero saw his worst Walk Rate in his professional career in 2012 at 5.2% and his ISO was a disturbing .126, which was almost 100 points below the ISO he posted during his brief stint with the Yankees in 2011. All of Montero’s Minor League statistics indicate that this should just be a bump in the road, but if there is an offensive weapon that is key to the Mariners success in the future, it is Montero. During his time as a prospect, Montero was routinely compared to the premiere power hitters in the game. The Mariners have to hope that he will live up that hype in the coming seasons

Kyle Seager is the Mariners 26 year old Third Baseman. Last season was Seager’s first full stint in the Major Leagues, and it was a solid one. Seager hit 20 home runs while providing good play at the hot corner and contributing 3.6 Wins Above Replacement to the Mariners’ squad. The Mariners would love to believe that Seager’s performance is repeatable and that they have found their third basemen for the foreseeable future. While I won’t speak to whether Seager can defend at the same level again, we will review the likelihood of continued offensive success. Seager shows some signs that we would like to see trend up to move up from an average level of production.  It would be good to see Seager’s wOBA increase from about the league average .321, which would correspond at least somewhat with an increased walk rate.  Seager already is fairly proficient at limiting his strike outs, which is a positive factor moving forward.

The Mariners have a particularly interesting set of cheaper options. In the previous trade analysis, I discussed Justin Smoak.  I would love to see Smoak get a full slate of plate appearances this year to see if his September numbers were the beginning of the player growing into a successful major league hitter, however, as previously stated, I don’t see where those plate appearances will come from with the Mariners paying Mike Morse, Kendrys Morales and Jesus Montero not being able to catch at what we would consider an adequate level.

Overall, the Mariners are a middle tier team with payroll, which is disheartening given the results the team has experienced of late, but the good news is that the M’s do not have a lot of large, long term contracts dragging them down.  They have the necessary flexibility to survive moving forward and the ace that can carry them back to the promised land as long as he can remain healthy. 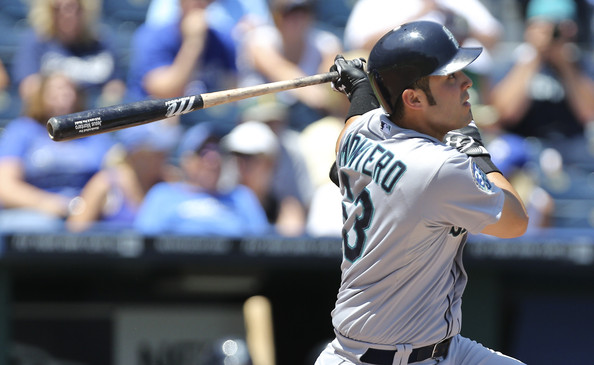 A big thank-you goes out to Our ‘Trade Correspondent’ Nicholas Rossoletti for preparing today’s featured article. Nicholas is a young professional living in downtown Miami. He is a lifelong baseball fan and an avid Yankee supporter. Having grown up during the last two decades, he counts Derek Jeter and Mariano Rivera as his favorite ball players of all time. He believes in sabermetrics and that new stats have already changed the way the baseball industry sees players. He was for Trout over Cabrera, he thinks RBIs tell you a lot more about a team than a player and that defense and pitching, ultimately, win championships. Rational thought and introspective analysis over the narrative is how we come to understand the game we love. The narrative is just a way to keep those who don’t really love the game watching. Feel free to follow Nicholas on twitter and talk the game of baseball Follow @NRoss56

“There are three things in my life which I really love: God, my family, and baseball. The only problem – once baseball season starts, I change the order around a bit.” ~Al Gallagher, 1971