← The Rays and Royals Could Be Ready to Pull Off A Major Trade
Jose Valverde: Ready to Rejoin the Houston Astros? → 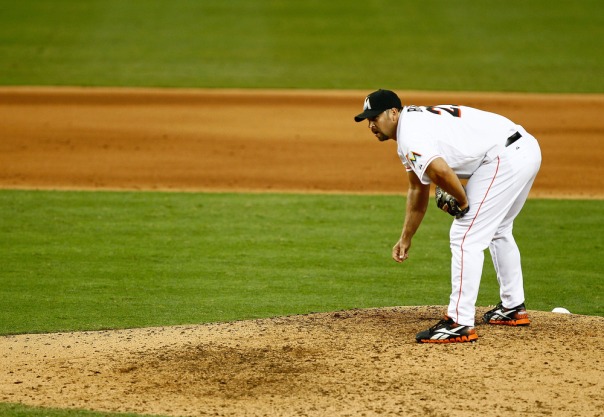 The Diamondbacks are looking at having an incredibly strong bullpen in 2013.

In 2011, the Arizona Diamondbacks made a really nice push in the AL West and finished with 94 wins, 8 games ahead of the second place San Francisco Giants.  They performed well above expectations, and they did so with a relatively unglamorous starting rotation, that consisted mainly of Ian Kennedy, Joe Saunders, Josh Collmenter, Daniel Hudson and a revolving 5th starter.  What really carried the team in 2011 and made the Arizona Diamondbacks a competitive in 2011, happened to be their weakest link in their miserable 2010 season: the bullpen.

The Diamondbacks won 29 more games in 2011 than they did in 2010.  The most drastic changes made by the organization were in the bullpen where the D-Back’s added closer J.J. Putz and setup man David Hernandez.  The 2011 bullpen allowed 100 fewer runs than their predecessors in 2010 and dropped their group ERA from 5.74 in 2010 to just 3.71 in 2011.  It goes without saying that their newly revamped bullpen allowed Arizona to stay close in a lot more games and gave them a better chance to be winners.

Following their great 2011 season, the D-Back’s found themselves reverting back to their former ways in 2012.  Finishing 13 games behind the first place Giants, and just barely hanging on to a .500 record, the Diamondback’s finished 81-81.  You want to know something interesting?  It was their bullpen, once again, that failed. 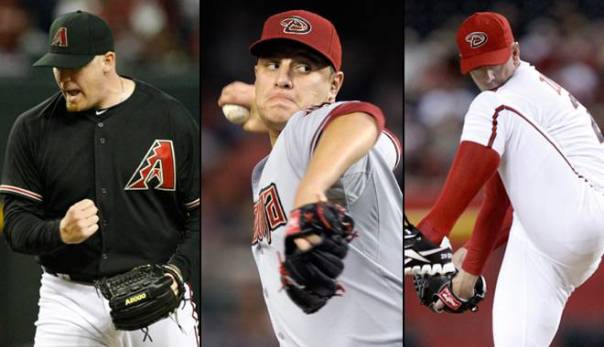 The Diamondbacks worked hard to fix their 2011 bullpen and came into 2012 with a bullpen core of David Hernandez, Brad Ziegler and J.J. Putz.

In fact, if you back to the last month of the season, the team was only 6.5 games behind in the wild card race and only 9.5 games behind the Giants.  Yes, with less than a month to go, jumping 6.5 games is quite a hurdle—but we have seen much more drastic September rallies in the game of baseball.  We look at the 6.5 game deficit, and fans have to ask, “what if”?  Over the course of 162 games, there are so games that fall one way or the other because of some minute detail.  Baseball is a game of milliseconds…professional ball players who have played their whole life still practice things like running the bases is the most efficient fashion to make sure they get in before the tag, pitchers work on reducing the time it takes them to get to the plate, and outfielders figure out the most efficient way to get rid of the ball after a pop-up.  When our favorite teams just miss the postseason by a few games, we can always look back at the “games that got away”.  But in this particular case, we look at the Arizona Diamondbacks bullpen, and how they performed in close games.

The Diamondbacks, in 2012, boasted a record of 11-23 in one run games.  This, as expected, was good enough to rank worst in the national league.  The difference between the winners and the losers over a 162 game season is which teams are able to eke out those extra wins when the going gets tough.  When you are stuck with a bullpen that cannot hold a lead or even keep you in the game, your team does not stand a chance.  That’s why GM Kevin Towers opted to make some moves late in the season to bolster the bullpen.  Going forward into 2013, the Arizona Diamondbacks are looking like they are going to have an absolutely devastating bullpen for any opposing lineups to deal with. 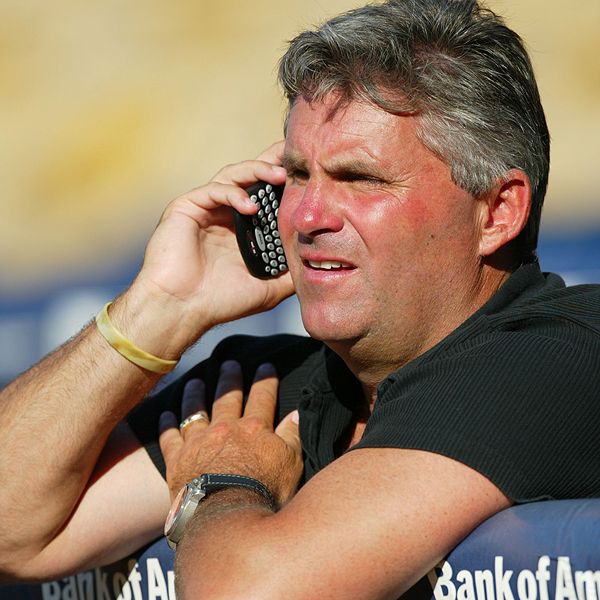 Arizona GM Kevin Towers has been extremely busy pulling strings and making all the right moves to form an elite bullpen.

When it comes down to really looking at the Diamondbacks 11-23 record in 1 run games, a lot of this can actually be attributed to a lack of defense.  The bullpen, on the other hand, really was not wholly responsible for this devastating statistic. In fact, when we look back at the bullpen’s performance in 2012, they ended up with a collective 3.28 ERA.  That’s pretty good!  The moves made in 2011 that brought over J.J. Putz and David Hernandez really built an infrastructure for the future.  Towers recognized from the success the team had, how important a reliable bullpen really is.  That’s why late in the 2012 season he pulled the trigger on a few more acquisitions to form an absolute lights out bullpen.

As if dealing with David Hernandez in the 8th inning (who posted a 2.50 ERA and averaged 1.4 strikeouts/inning) and J.J. Putz in the 9th (2.82 ERA, 1.2 strikeouts/inning), the Diamondbacks also had the emergence of Brad Ziegler as a go to guy that could be trusted with any situation (2.49 ERA). Over the last 2 months of the season, Kevin Towers made a couple moves to pretty much ensure that in 2013 the D-Back’s would have arguably the most elite bullpen in baseball.

Effectively, Towers removed the only two guys in the bullpen that had ERA’s above 3.00, and replaced them with time-tested, proven stars.  Late in August, whilst trying to salvage their season and stay in the NL West race, Towers sent Joe Saunders over to the Baltimore Orioles, and fetched Matt Lindstrom in return.  Then, in October, when the season was clearly over for Arizona a trade was made a three team trade that made Heath Bell the latest addition to the Arizona bullpen.

Bell had just signed a lucrative 3-year deal with the Marlins prior to the 2012 season, but the setup man turned closer who had previously proven to be one of the most dominant late inning men in baseball, had a shaky first season in Miami.  After giving up 8 saves in 27 chances and putting up a 5.09 ERA in 73 games pitched, the disappointed Marlins opted to shed some payroll.  These numbers are very clearly not representative of the type of pitcher that Heath Bell is, and a few quirks in Bell’s mechanics have been observed.  It’s reasonable to assume that Arizona pitching coach Charles Nagy and bullpen coach Glenn Sherlock will be able to solve these issues and return to flame thrower back to his former self.

With a legitimate 1-2 punch of Bell and Putz in the 8th and 9th inning, this allows the D-Back’s to utilize the talents of David Hernandez in more of a long arm role out of the bullpen.  With the Diamondbacks young rotation, having a trustworthy guy such as Hernandez who can take control of games before they slip away…is a very good thing. 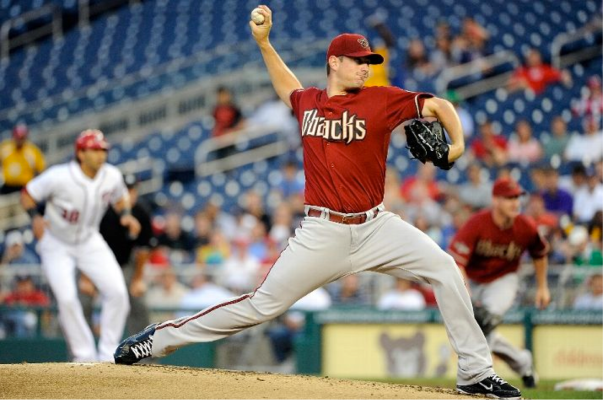 The Diamondbacks bullpen is looking very strong going into 2013. The magnificent arms of Matt Lindstrom, Brad Ziegler and David Hernandez will offer top-notch relief in the middle innings and the devastating 1-2 punch of Heath Bell and J.J. Putz will seal the deal on any leads beyond the 8th inning.

The front of the bullpen is now sitting very comfortable with the steady arms of Ziegler and Bell, and newly acquired Matt Lindstrom.  All Kevin Towers has done is completely re-vamp the Arizona bullpen going into 2013.   The addition of Lindstrom added another pitcher capable of a sub-3.00 ERA to the already impressive duo of Ziegler and Hernandez.  This means that even if the young rotation stumbles a little bit, the middle of the game is more than covered on the mound. The acquisition of Heath Bell (who played under Towers in San Diego)  secures the middle of the bullpen even more by putting a former lights out closer in for the 6th and/or 7th inning(s).  If he can rediscover his footing, the D-Back’s will have a bullpen with essentially 3 closers, and two very solid middle men.

(Note: Yes, the D-Backs have declined Lindstrom’s option for 2013, but he is still being considered as a candidate to return via free agency.  Kevin Towers is a GM who has always placed value in a dynamic bullpen and actually gave up Joe Saunders in order to receive Lindstrom in the first place.  It seems doubtful that he would give up on a guy who pitched to the tune of a 2.68 ERA last year and they are hoping to re-sign him for less than his $4 million option).

Looking at the 29 other bullpens in baseball, it is difficult to find a unit as intimidating as what we find in Phoenix.  Sure, the World Series has just ended, and the offseason has just begun, but Diamondback fans can look forward at 2013 and know that they have an all-star bullpen.  Kevin Towers clearly observed that a large part of the team’s success in 2011 was due to their strong bullpen and has acted to develop another knockout pen.  The D-Back’s will most likely find themselves in a lot more games, a lot later into games, and with more chances to win.  The Snakes will likely be on the other side of most one run games in 2013.

Alex Mednick is a Baseball Writer and Analyst with MLB Reports.  He has both played and followed the game extensively his entire life.  Alex grew up in New Haven, Connecticut—right in the crossroads of Red Sox Nation and The Yankee Empire.  Somehow, he dodged the bullet of joining the war between these two teams, and a love affair between the Toronto Blue Jays and Alex formed.  Growing up in Connecticut, Alex Mednick idolized Joe Carter and Roberto Alomar.  When he was 19 he moved to Saint Petersburg, Florida.  Here he attended Eckerd College and continued fulfilling his love for baseball.  Tropicana Field was 5 minutes from his apartment, and there were 5 spring training camps within an hour drive.  Alex graduated from Eckerd in 2010 with a B.S. in International Business and dual minors in Spanish and Management.  Most importantly, he met his amazing wife in college, and the two now reside in Stuart, Florida.

← The Rays and Royals Could Be Ready to Pull Off A Major Trade
Jose Valverde: Ready to Rejoin the Houston Astros? →