← Los Angeles Dodgers: The Logic of Taking on Big Stars and Huge Salaries
The Boston Red Sox Should be Cautious Pursuing Josh Hamilton →

The Philadelphia Phillies Franchise Part 3 of 4: The Pitchers

Note from Chuck Booth:  I am attempting to bring the history for each of the 30 MLB Franchises into a 5 part series that will focus on 1. The teams history.  2. The hitters 3. The pitchers. 4. The Teams Payroll going into 2013 and 5.The Ball Park that they play in. (The stadium articles will all be done next summer when I go to all of the parks in under a month again.)  Be sure to check my author page with a list of all of  my archived articles here.

Chuck Booth (Lead Baseball Writer): Follow @chuckbooth3024  This team has played for almost 130 years.  As such, they have a great deal of history, so there are going to be several more hitters than pitchers as is the case with most Franchises.  For the first seasons as the Quakers, they had some decent pitchers.  It wasn’t until Pete Grover Alexander joined the club, that Philadelphia Phillies fams got to see a Hall of Fame pitcher before their very eyes.  From Alexander, to Robin Roberts and Curt Simmons, to Jim Bunning, Rick Wise and Chris Short, to Steve Carlton, Tug McGraw and Jim Lonborg, to Curt Schilling and Mitch Williams, to Cole Hamels, Cliff Lee and Roy Halladay, the Phillies Pitchers have been improving in each generation.

Last year when the club won a record 102 games for the Franchise, they had the best 4 starters they had ever assembled in Halladay, Lee, Hamels and Roy Oswalt to take the mound.  Having Kyle Kendrick and Joe Blanton as your 5th starter is an option most teams would love to have.  The Phillies have been one of the best teams in the National League since 1975.  They have appeared in 9 NLCS’s and 5 World Series while winning 2 of them.  That is an impressive 36 year run.  Going forward, the clubs pitchers still look solid.  Cole Hamels just signed a 6 year extension, Cliff Lee is around for 3 more years and Roy Halladay still has 2 more years left after this.  The club also signed Jonathan Papelbon up until the end of the 2015 season before 2012 began.  Papelbon may have a chance to make this list when someone else chronicles the best pitchers in Phillies history one day 25 years from now.

If you ask me to have a Mount Rushmore of Pitchers it would be: Steve Carlton, Robin Roberts, Grover Alexander and probably Cole Hamels because of his instrumental pitching since the 2007 season.

For Part 1 of the Phillies Article Series: The Franchise click here:

For Part 2 of the Phillies Article Series: The Hitters click here: 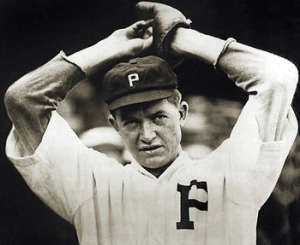 Grover Alexander ranks 3rd in MLB History with 373 Wins versus only 208 defeats. He won 190 games of his totals with the Philllies.

Jack Taylor 1892-1897  96-55 (.555) 4.34:  “Brewery Jack” was a lightning rod when fighting with the umpires and he played for the famous team that had Billy Hamilton, Ed Delahanty and Sam Thompson in the outfield.  Taylor’s best year was 1895, where he went 26-14.  Sadly, at the age of 27 he also died of a kidney disease, although he was pitching for a different organization, the Phillies fans honored him.

Grover Alexander 1911-1917  190-91 (.676) 2.18 ERA:  Point Blank, Grover Alexander is on the Mount Rushmore for greatest starting pitchers of all time in MLB History behind only Walter Johnson, Cy Young and Lefty Grove.  For the Phillies, he led the League in wins 5 times, IP 6x, CG 5X, SHO 5X, SO 5X, ERA 2X and Winning Percentage once.  He is the Phillies ALL-Time Leader in Win Percentage.  Alexander was traded after the 1917 season because the Phillies Management thought he was going to get drafted for World War I.  In the World Series run year of 1915, he went 31-10 with an astounding 1.22 ERA.  He would throw 4 more years consecutively of an ERA under 2.  Alexander eventually won a World Series with the Cardinals.  Alexander is tied with Christy Matthewson for 1st in NL wins with 373.  He is 3rd place ALL-Time to Cy Young (511 wins) and Walter Johnston’s (417 wins.)  He was inducted into the BBHOF in 1938 with 80.2% of the vote.  Alexander was on hand for Game #3 of the 1950 World Series where the Yankees defeated the Phillies. He died less than a month after.

Bunning also led the league in IP and SO during the 1967 year.  In his 4 full years with the Phillies, he also hit the most opposing batters in every year. He is also tied for the fewest amount of pitches for striking out the side by throwing 9 strikes in a row to 3 batters in an inning in 1959.  At the time of his retirement, his 2855 Career Strikeouts ranked him 2nd only to Walter Johnson (3508).  In 1996, he was voted into the Baseball Hall of Fame by the Veterans Committee.  From 2009-2011, he was a United States Senator in the state of Kentucky.  He is currently 80 years old.

Carlton has the second most Strikeouts ALL-Time by a Lefty (1st is Randy Johnson) and is 4th overall with 4136.  Only Nolan Ryan (5714) Randy Johnson (4875) and Roger Clemens (4672) have more.  His 327 wins are good for 2nd ALL-Time for a Lefty behind Warren Spahns 363.  Steve Carlton was elected into the Baseball Hall of Fame in 1994 in his 1st ballot chance with a 95.8% approval rate.  He won a World Series with the Phillies in 1980 and appeared in the 1983 World Series as well.  Carlton also won a WS with the 1967 St. Louis Cardinals.  Carlton and Ryan both took turns as the ALL-Time Strikeouts (after passing Johnson) leader before injuries finally caught up to Carlton and Ryan pitched until he was 46 and amassed 5714 strikeouts 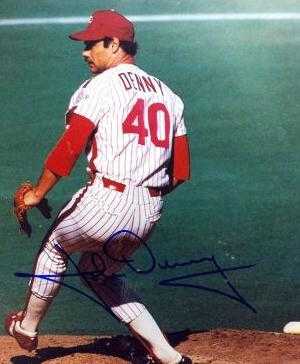 Tommy Greene came over to the Phillies with some guy named Dale Murphy just after the 1990 Non-Waiver Trade Deadline.  In just his second start of the season in 1991, he threw a no-hitter against the Montreal Expos at Olympic Stadium on May.23/1991. 5 days later, this time back at Veterans Stadium, Greene threw a three hit shut out versus the team from Canada.  In that 1991 year, 4 out of the 13 wins Greene had were against the Expos, where he only gave up 1 earned run in 32 Innings Pitched against the NL East Opponent.  Greene rode that success to a 13-7 year with a 3.38 ERA.  Unfortunately he spent half of 1992 with arm problems.  In 1993, the Phillies hurler was 16-4 with a 3.42 ERA and finished in 6th for NL CY Young voting.  He was absolutely destroyed in 3 Playoff Appearances though versus the Atlanta Braves and the World Series Winning Toronto Blue Jays, where he carried a 13.11 ERA for the postseason.  Incredibly, he was 1-1 for that playoff run.  Tommy Greene had shoulder problems that persisted and he only ever won 2 more games in the Majors.  For the Phillies, his record was 36-22, although he headed into the 1994 player strike at 36-17.

Mitch Williams  1991-1993  20-20 (.500) 3.11 ERA 102 SV:  “The Wildthing” signed as a Free Agent before the 1991 year and rewarded them with a 12-5 Record and 30 Saves out of the Pen.  Williams finished 6th in Cy Young Voting in 1992.  Williams was an old school chucker, so he would want the ball every day if you wanted to give it to him.  In 1993, he was part of the World Series Appearing team and a lot of it was due to his bullpen work.  Mitch had 43 Saves in the regular season and 2 more in the NLCS to take the MVP.  He was roughed up and forever blamed for giving up Joe Carter’s walk-off Homer, even though he placed the ball knee high on the inside corner.  Williams sits in 3rd place ALL-Time for Phillie Saves.

Jamie Moyer 2006-2010  56-40 (.583)  4.83 ERA:  The Phillies just thought they got someone for the stretch drive in 2006 when they picked up 43 year old Moyer from the Mariners.  He would amaze everyone by being productive for 5 years with club between the ages of 43-47.  He never had a losing season for the club.  Jamie was 235-155 for his career after the age of 30.  He stands 3rd ALL-Time for winning pitchers over the age of 30 behind Phil Niekro and Warren Spahn.  His greatest game as a Phillie in Game #3 of the 2008 WS.  Jamie had a quality start of 6 IP, yielded 3 runs and struck out 5.  At the age of 45, he was the oldest to ever win a WS Game.  He matched that feat this year by being the oldest to ever record a hit, the oldest to ever win a game and the oldest ever to start a game.  To see my Dedication Article to Jamie Moyer click here .

For Part 1 of the Phillies Article Series: The Franchise click here:

For Part 2 of the Phillies Article Series: The Hitters click here:

Brad Lidge saved exactly 100 games with the Phillies, 41 of them came with the 2008 Phillies that went onto win the World Series. Lidge was perfect in the regular season and then in 7 straight opportunities in the post season.

***Thank you to our Lead Baseball Writer- Chuck Booth for prep

aring today’s feature on MLB reports.  To learn more about “The Fastest 30 Ballgames” and Chuck Booth, you can follow Chuck on Twitter (@ChuckBooth3024) and you can also follow Chuck’s website for his Guinness Book of World Record Bid to see all 30 MLB Park in 23 days click here  or on the 30 MLB Parks in 23 days GWR tracker at the Reports click here. To Purchase or read about “The Fastest 30 Ballgames Book, ” please click here ***